Our next stop was the South Shore Wine Company, one of Mazza's sister wineries. 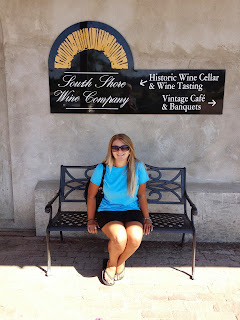 South Shore is one of the most historic wineries in North East, PA, and was established in 1864. Originally, there was a beautiful French-style wine cavern underground and a barn-like building upstairs. Prohibition in the 1920's took it's toll on the wine production- the cellar remained though wine wasn't produced for years- and the above ground facility had been renovated into a party hall.

I'm not sure when exactly South Shore started to produce wine again. I'll be sure to ask on our return visit.

As you enter, you'll immediately notice the beautiful stone on the walls and ceiling, which is the original architecture from 1864. Being below ground level, the cavern has a naturally cool temperature and is somewhat dark- perfect for storing wine. Through a stone archway in the back is the most stunning tasting room I've seen to-date. The breathtaking stonework continues into the tasting room; it's impossible not to be swept away by the distinct, old-world European ambiance. The tasting bar is poured concrete, which fits in perfectly with the stonework that surrounds it.

It is absolutely incredible. We were in awe throughout our visit. I can't even begin to put into words how impressive the craftsmanship is; it is truly a work of art. This is so unique and so beautiful that it is worth seeing even if you have no interest in wine whatsoever.

Being a sister winery of Mazza, we saw a lot of the same wines at South Shore as we did at our previous stop. However, any overlap on the wine list was completely forgivable as it was overshadowed by the gorgeous stonework and craftsmanship in the wine cavern and the tasting room.

As for the wine itself, we again were not let down. The Traminette was well done. If you're not familiar with it, Traminette is a white wine that's generally pretty sweet and similar to a Gewurtztraminer in style. South Shore's was billed as semi-dry and truly was semi-dry, which was not what I expected. There were some floral notes in the taste, a slightly peachy nose, and a little bit of a spicy kick in the finish- the kind that gives you a warm feeling that radiates from the sternum. This is a very unique Traminette and I would recommend it for someone who is transitioning from sweet to dry wines.

The Noiret was a decent, full-bodied red with some berry in the nose and black pepper in the taste. The black pepper was almost reminiscent of a Zinfandel but the overall body was lighter. This would be another good choice for anyone transitioning to dry wines.

The Lemburger was outstanding- so much so that we both ordered our own tastings. This is another wine that boasts a black pepper taste but also has some blackberry, black cherry, and plum notes. I had never tried a wine like this before. For having so many dark, rich, fruity flavors, it's dry and crisp- very food friendly. The finish was smooth for a wine that is oaked for 23 months.

We had a good laugh with our next wine, which was the Bare Bones Red. The Bear ordered it and made me smell it right away. It smelled like Trail Bologna. Then we tasted it and it tasted like Trail Bologna. If you don't know what Trail Bologna is, it's an all-beef bologna product made by Troyer's in Trail, Ohio, that has a very strong garlic and processed meat odor. The Bear loves it. I find it to be particularly offensive and he knows this, so making me try it and getting my reaction was purely for his enjoyment. I had no idea that the very distinct taste and smell of Trail Bologna could be recreated by anything other than Trail Bologna, let alone grapes. I'll let everyone form their own opinion on this one since I clearly still can't get past my first impression of "OMG it's Trail Bologna."

Though I may not have liked this one, it at least gave us a fond and enjoyable memory.

On a lighter note, the Bare Bones White was another wine that totally exceeded our expectations and ended up stealing the show at South Shore. It's a blend of Vidal Blanc, Cayuga White, Traminette, and Riesling. With a blend like that, I fully expected this to be on a Sno-Cone-syrup level of sweetness. I was shocked when I tasted a true, semi-sweet white blend that leans on the dry side of the semi-sweet spectrum. It's bright and crisp with a fruity nose and a clean finish. Bare Bones White goes down smooth, making it a good wine to take with us on our friend's boat on a warm evening after work. This was the bottle we ended up taking home. 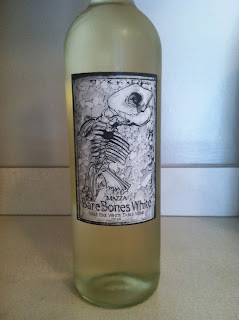 We recently uncorked the Bare Bones White to have with chicken and black bean enchiladas that I made for dinner. I had been craving them for a while but the Bear isn't fond of spicy foods at all. I chose the Bare Bones White in hopes that the slight sweetness from the wine would offset any heat from the flavor so it wouldn't be too much for him, but there would still be enough spice that I would like it, too. It worked wonders, we both really enjoyed it.

There is a cafe in the upstairs barn building that we didn't get a chance to see when we were there. They sell paninis, salads, soups, and other small plates that compliment a wine tasting well. There are also plenty more wines that we didn't try, so if you like fruit wines and sweeter wines, you'll certainly find something you like at South Shore. If you're interested in hosting an event, both the hall and the wine cavern are available for booking.

If you can't make it to North East, PA, South Shore's wines can be shipped within the state of Pennsylvania. If you're outside the state, call 814-725-1585 during normal business hours to place an order and see if they can ship to you. The discount rates are 20% on 12 or more bottles and 10% on 6-11 bottles. Some wines, as indicated on their website, are not discountable.

South Shore Wine Company is another must-go if you'll be in the area. To be completely honest, the unique stone craftsmanship is worth a trip on its own. This is architecture and style that you won't find many other places, at least not in the United States. The wine makes it even more worth your while, but even if you're not a big wine drinker, go just to see the facility- you won't be disappointed. It is truly a unique sight to see. We were both blown away by the beautiful cavern; I can't imagine the hard work that went into creating it. Tons of photos can be viewed on Mazza's official Facebook page and I strongly encourage everyone to check them out. Be sure to "like" them to receive updates on special events.

We will definitely be returning to South Shore and I will take pictures to share next time. Like Mazza, South Shore is a winery with good wine, great people, and a gorgeous establishment. Check back soon for the next winery on our list, Courtyard Vineyards in North East, PA. Enjoy your pours responsibly! Cheers!
Posted by Unknown at 9:58 AM